On Monday I flew down to Lost Wages (aka Las Vegas) to attend the 20Booksto50K™ conference. For those unfamiliar with the organization, it’s one set up by bestselling indie authors/self-publishers Michael Anderle and Craig Martell (both of whom are great people – I hope they enjoy the whiskey I left for them) for the purpose of helping other indie authors/self-publishers (like yours truly) to become successful.

The conference, as usual, was great, inspiration, and loaded with information. I came away feeling like the kid in the Gary Larson cartoon who asks to be excused from class because his brain is full. 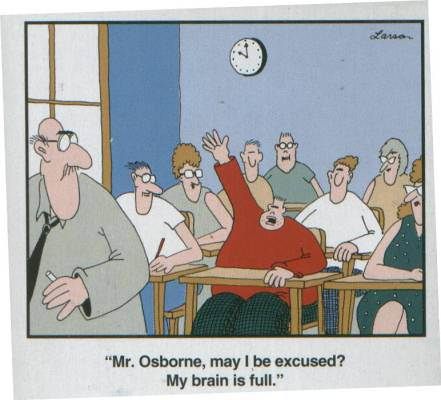 Along with helping me get on track writing (despite my incredibly hectic schedule), the conference gave me some inspiration in other areas.

So, what to expect? First – finish Explorer. I’m also seeking to have my novels translated into German for distribution throughout Germany, Switzerland, and Austria (hey, when you’re compared to Karl May….), and then on to audio books and screenplays (just in case).

I’m also working on the backstory, Openings, and a YA novel set in the same timeline. I know many of you are waiting for Explorer, and I apologize for the delay, but with any luck the first draft will be finished by year’s end (then off to the alpha readers, editor, and beta readers).

As a side note, I met many authors. If I have time, I’ll read some of their books and throw some reviews out for you.

Check out the Books on Amazon

As an Amazon Associate I earn from qualifying purchases (so feel free to purchase from the links above).

I’ve also got autographed copies for sale. I accept checks or you can pay via PayPal. Just shoot me a message through the Contact button and we’ll make stuff happen.